ON Monday 16 March, I gave an interview to Radio Sputnik where I shared my thoughts on various aspects of the coronavirus pandemic.

What will it mean for the US Presidential election? How will the UK and US be able to compensate those who lose their jobs due to the Coronavirus? How could the Coronavirus impact on the UK’s post-Brexit trade negotiations with the EU and US? What can we all to do minimise the risk to ourselves, our families, and to wider society?

Sputnik: How could the Coronavirus impact the US Presidential election?

Marcus Stead: It’s far too early to say that the US Presidential Election will be postponed, we’ll have to see what the situation is by the time we get into the late summer, but in terms of Donald Trump’s reaction to this, it all seems very haphazard.

Trump was speaking off the cuff the other day, saying that it’s all going to be fine and that we were all going to get through this, don’t stockpile, it’s not Christmas, you don’t need to buy lots of stuff from supermarkets, it’s all very haphazard.

I think all of us, whether we are in the media or politicians; need to be very careful with the words we use at the moment, because there is a very fine line to tread between making people aware of the sheer seriousness of the situation, and at the same time not causing unnecessary panic.

In the case of Donald Trump; it all seems a little bit too haphazard, and a little bit too flippant the way he was speaking, but I will say this much for Donald Trump, at least he was appearing on television over the weekend, whereas Boris Johnson hasn’t appeared since last Thursday, although that is likely to change by the end of the day, but least we are seeing some leadership on this from Trump.

As for Joe Biden; the way he was speaking the other day, it was as though he was already the President, the way he was reacting towards the end of last week, and in reality, the sheer logistics now of the Democrats selecting a candidate for the Presidential Election may prove difficult in the weeks and months ahead, but will it actually impact the election itself? We’ll have to see what the situation is later this summer.

Sputnik: How will the UK and US be able to compensate those who lose their jobs due to the Coronavirus?

Marcus Stead: I think in terms of the welfare state and the government situation there, it’s going to be very expensive for the government, and they are going to have to prioritise, because if people are not in work; because they’ve been told to self-isolate, therefore they are not going to be paying as much, or any income tax, also if they’ve not got a regular salary coming in, they are not going to be able to go out and about and to buy products that have got VAT on them, and it’s likely that shops and bars will be closed anyway, so even if you wanted to go out, you probably couldn’t for a period of time.

The government will, therefore, lose out on income tax revenue and VAT revenue, and we’ve also got a third factor, and that is that if parents have to stay at home and look after children because of the schools being shut if we get to that stage; then if they are off work for an extended period of time for child care, then they become recipients of welfare payments as a result.

The government is being hit insofar as a lack of money coming in, in terms of tax revenue, and there is more money going out because more people would be entitled to benefits under those circumstances, and I think that there will be some very stark choices that will have to be made.

Even if the Coronavirus was to disappear tomorrow; and I’m afraid that is not going to happen, the economic impact in terms of government spending is already absolutely enormous, and if there wasn’t a budget scheduled for last week, then Chancellor of the Exchequer Rishi Sunak would have had to have had an emergency budget anyway, such is the magnitude of the situation.

Sputnik: How could the Coronavirus impact on the UK’s post-Brexit trade negotiations with the EU and US?

Marcus Stead: The best thing we could do now is take a moment for a sobering reality check. We know that the over the seventies are more likely to become critically ill due to the Coronavirus, as they could have underlying health conditions, but that’s not the reason they are more likely to die from the virus.

This is the brutal honest truth, and it’s this; healthcare is going to have to be rationed, and when that happens, people over the age of sixty-five are going to be at the bottom of the list, not those who are very frail and very old, I mean anyone over sixty-five.

There is not going to be any scenario when the NHS has enough beds and staffs to save everyone, and when thousands of people are critically ill, doctors have to decide who lives and who dies, and this is already happening in Italy.

The over sixty fives will not be given respiratory aid if there are younger people who need that lifesaving equipment, and many younger people will, right now most people in Britain and elsewhere have still not grasped the seriousness of the situation.

You may be young or middle-aged, you may not be very worried at all about the Coronavirus, because it’s quite likely that you’ll fight it off, indeed you probably will recover, but during the incubation period of we think around twenty-one days, when you are visiting elderly parents and grandparents, and standing behind an elderly person in a queue, or sitting next to them on a bus, you are passing the virus on to them, and it’s going to be far more deadly for them, for the reasons that I have outlined.

Boris Johnson and his government are buying time with their strategy, they are trying to push it until the end of April onwards, when the normal winter pressures on the NHS will have been alleviated, enabling them to treat more people suffering from the Coronavirus.

Life in this country is going to be very difficult for us all over the next two to three months, quite possibly longer, now as for the economy; the economic impact of the Coronavirus is already absolutely enormous, the FTSE lost ten per cent of its value in a single day last week, and that was the second-worst day on record after the nineteenth of October 1987.

It’s very bad news indeed for anyone planning on retiring with a private pension at any time over the next ten years, but it goes well beyond that as well. I can think of a coffee shop where I live in the Welsh Valleys, where the owner has spent the last few weeks recovering from Storm Dennis, they’ve cleared up, they’ve refurbished, it’s open again, only for people to stay at home because of the Coronavirus.

There will be lots more stories like that. Ireland is ordering all pubs to shut down until at least the twenty-ninth of March, and the UK may well do likewise before too much longer, the same will apply to restaurants, theatres, cinemas and more, and that’s without mentioning wedding venues, conference venues, bed and breakfasts, the list goes on.

How many of them can afford to stay shut for any length of time? We are all going to have to find new ways of working wherever possible, yes that business report still needs to be done, but surely you can work from home? Maybe that team meeting you are thinking of having this week really does need to take place, but come on; let’s use Skype or another platform, we don’t need offices in the way we used to, and we need to take responsibility and grit our teeth for the next few months.

It seemed likely to me even before the Coronavirus took place, that getting a Canada style deal which the UK’s Chief Brexit negotiator David Frost was saying we should aim for, seemed highly ambitious to me, because the actual Canada deal has been negotiated since about 2004, and has not yet been completed.

It not only has to be agreed by the European Parliament, but all the different administrations, and I don’t just mean national parliaments, I mean devolved institutions like the Scottish Parliament, and that process even before the whole Coronavirus took place, was still far from complete.

Whilst I think Brexit negotiations can continue; vis Skype or other platforms, they are very much on the backburner now for obvious reasons, but I always thought that the overall transition period was always likely to take far longer than the end of this year.

I welcome the news that the British government is now going to give daily televised press briefings. We saw at the weekend how information was being leaked out, and another concerning aspect of this is the impact that devolution is having in response to the crisis.

Twenty-five years ago, there was no Scottish Parliament or Welsh Assembly, there would have been one UK Health Minister dealing with a co-ordinated response across the UK, and now that is not the case, and that’s without mentioning the situation in Northern Ireland.

Britain is a small island, and it’s important that the containment strategy is the same across the whole of this island, as Coronavirus does not respect Hadrian’s Wall or Offa’s Dyke, and this is one particularly disappointing aspect for me right now.

TO CELEBRATE the United Kingdom’s departure from the European Union, Greg Lance-Watkins and I recorded a special edition of our ‘Twenty Minute Topic’ series of podcasts titled ‘The Great Brexiteers’. 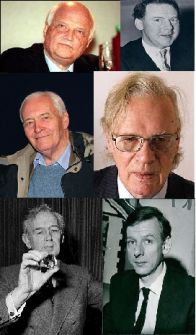 Greg and I pay tribute to those eurosceptics who campaigned for Brexit, but sadly did not live long enough to see it delivered.

Among those we pay tribute to are Norris McWhirter, perhaps best known for his role on long-running children’s TV programme Record Breakers, Labour politicians Peter Shore and Tony Benn, as well as Greg’s friend Christopher Booker, the campaigning journalist who died last year.

We could not possibly pay tribute to everyone who did their bit, but this podcast gives a brief insight into just some of the great characters who helped make Brexit happen.